Sigma Chi has many noteworthy brothers. This is by no means a complete list of them, but it does include many famous brothers of the Sigma Chi Fraternity.

Southern California ’29
Motion Picture Star
“When I became a Sigma Chi it was great; I was proud of the association. It was kind of an instant confidence builder for me, that, and what I considered the best fraternity on campus, had actually wanted me. I had always been very shy and without a lot of confidence. It was a really good social experience, and for me, a social maturation and a great benefit.”

Ball State ’69
Talk Show Host Extraordinaire
“What you do in life by yourself doesn’t mean as much as what you accomplish with a group of people. Sigma Chi was one of the greatest things that happened to me. I really appreciate what it has done for men in my lifetime and I hope I can continue to give something back.”

Hanover ’83
Television & Movie Actor
“I made some very long-lasting friendships with Sigs in college…a lot of them have lasted to this day, and are a very valuable thing to me. The Fraternity has meant a lot to me, and the Ritual is very, very meaningful to me.”

Missouri-Columbia ’86
Motion Picture Star
“Sigma Chi was a learning experience for me in personal growth, in finding out more about myself, in shaping my life more effectively, and in directing my energies more efficiently. All of those things were heavily influenced by my Sigma Chi experience. There is no question that it has had a tremendous impact on my career professionally, and on my life.”

Purdue ’67
Former NFL Quarterback & Sports Analyst
“The key to our business is people skills. Sigma Chi helps you learn better people relationships, to get along with others, and also teaches the importance of honesty and integrity.” 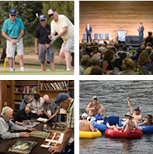